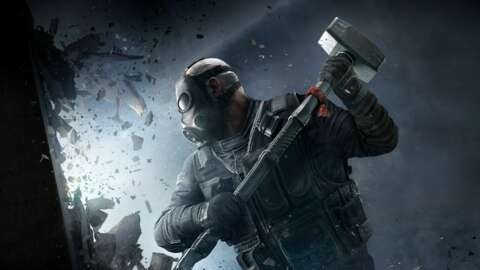 Rainbow Six Siege’s Y6S1.3 patch is live on all platforms, and the update brings some small but significant changes to the game. The patch’s largest changes are focused at Tachanka, and they buff his Shumikha Launcher in almost every possible way, including increased magazine capacity, increased explosion radius, and decreased detonation time.

Jackal and Jager both receive minor nerfs, with the C7E and the 416-C weapons holding a few less bullets in their magazine than before. Ace and Thermite get slight kit changes, with the former’s smoke grenades replaced with claymore mines, and the latter’s claymore changed to smoke grenades.

The patch also removes the Tactical Realism playlist type from the game entirely. Similar to Call of Duty’s Hardcore modes, Tactical Realism removed much of the game’s HUD and disabled enemy marking. The style has been replaced with an “interface preferences” option that allows players to enable and disable HUD parameters as they desire. The patch also changes how ranked match cancellation works. Now, players can only cancel a match during the prep phase of the first round, with abstentions counting as no votes. Ties will result in a cancelled game.

Stats micro-app is coming to Ubisoft Connect overlay.Discover your stats and compare them with your friends.Discover your playstyle as an Attacker and as a Defender.GAME HEALTH

A vote to cancel a match can only be triggered during the Preparation Phase in the first round of the match.When a player refrains from voting, it is considered a “no” vote instead of not being counted.The vote is still decided by the majority, with ties going in favor of a cancel.BUG FIXESGAMEPLAYFIXED – Attackers can use 2 drones to push the planted defuser inside the objective room.FIXED – Environmental destruction is not replicated for a player who joins an in-progress match.FIXED – Players who leave a Ranked or Unranked match are sometimes unable to rejoin and get infinite loading.FIXED – Players are able to get double MMR if 4 players leave the match and rejoin.FIXED – Explosions can destroy Bandit’s Shock Wire through reinforced walls and indestructible floors.FIXED – Cancelling a Ranked queue may result in an Abandon Penalty, even if the player never joined a match.LEVEL DESIGNFIXED – The drone can see through the curtains above the window near 1F Red Stairs on Villa map.FIXED – Doorway on the eastern side of 2F Bedroom is blocked if the player is AFK on Club House map.FIXED – Player is able to glitch inside of the car located in Garage on House map.FIXED – Drones get stuck inside the pile of wood in EXT Stable on Villa map.FIXED – Payphones have no collision with Operators on Outback map.FIXED – The spotlight in 1F Waiting Room no longer illuminates the environment when looking at it from 1F Customs Inspection on Border map.FIXED – Defenders can be detected outdoors when they stand near the door frame in 1F Waiting Room on Border map.FIXED – Collision issues around windows on Consulate map.FIXED – Player is able to plant the defuser between the bomb sites in 1F Main Lobby on Border map.FIXED – Attackers have unfair line of sight through a drone vent from EXT Office Balcony to 1F Bedroom on Skyscraper map.FIXED – Various LOD issues on Outback map.FIXED – Multiple collision issues on Chalet map on Xbox Series X.OPERATORSFIXED – Echo’s Yokai and Mozzie’s captured drones lose their signal on the stairs in B Snowmobile Garage Corridor on Chalet map.FIXED – When Flores’ RCE-Ratero Charge detonates, its HUD remains on screen.FIXED – Player with RFF is able to eliminate Caveira while she is interrogating an Attacker.USER EXPERIENCEFIXED – Minor cosmetic and UI issues.FIXED – Localization issues throughout the game.FIXED – Various Audio, SFX, and Animation issues throughout the game.FIXED – Infinite loading present if the player starts a match replay and enters the Options menu before the Operator reveal ends.FIXED – Error is received when attempting to purchase currency packs or digital content from the first party store in-game on PS5.FIXED – Inconsistent difficulty for Flores in the Battle Pass section and the Operators sectionFIXED – Player is kicked from Squad after changing their spoken language on Xbox.