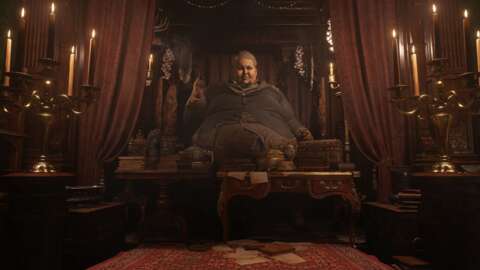 Resident Evil Village’s traveling merchant, the Duke, will sell you a whole lot of useful stuff over the course of the game. One service you might not know he offers, though, is his culinary expertise. If you find the ingredients, the Duke will cook various meals and share them with you. These meals are extremely useful–they boost protagonist Ethan Winters’ overall stats, giving him more health, faster movement speed, and a stronger defensive guard.

The ingredients the Duke needs for these meals are all various kinds of meat, which you can find around the village and surrounding area. Whenever you see animals such as fish, chickens, pigs, or goats, you should, uh, kill them. They’ll drop different kinds of meat you can then deliver to the Duke for each kind of meal. But there are several special, one-of-a-kind animals you’ll need to find in the village to make the very best foods. Below you’ll find all the details you need to make each of the Duke’s meals, including where you can find the rarest animals.

Quick Cooking TipsYou’ll gain access to the cooking system the first time you return to the village after venturing into Castle Dimitrescu. It’s a good idea to scour the village for ingredients every time you return to the village. Each time you head to different areas around the village outskirts, you’ll gain new keys and items that let you unlock new places, and thus, new animals.Mostly, the cooking system is just about finding animals. You’ll find most of them around the village just as you’re exploring during the game. When you find animals, they’ll be marked on your map, so you can easily return to get any that you might have missed. And sometimes, even animals you haven’t seen for yourself will be marked on the map–so make sure to use it to help you track down the ingredients you need.You can turn in your ingredients to the Duke at any time in the cooking menu, applying them to whatever recipe you want. This is a good practice for keeping your inventory clear, in fact; meat can take up a lot of space in your suitcase if you’re holding onto ingredients for a long time. That makes it tougher to pick up new weapons, ammo, and health items, dump ingredients quickly to free up space.As you work through the game, you might find photographs that show you rare animals. Each of these photos shows the animal and its background will give you clues about where those animals are located. We’re marking those animals’ locations in this guide, but if you want to find them on your own, you can do that by diligently searching through Resident Evil Village. You’ll know the rare animals by their coloring: you’re looking for a bluebird, a white pig, and a yellow fish.After leaving Moreau’s Reservoir, there will be several signs scattered through the village directing you to your next objective. Follow them until you see the one marked “Good Luck!” that points you into a tunnel. If you turn left here and follow the path, you’ll come across Otto’s Mill, where the Cannibal’s Plunder treasure is marked on your map. Expect a fight when you go inside the mill, but it’s worth the effort to unlock room filled with spare meat, fish, and poultry. You can use it to shore up any recipes you might be lagging on (specifically if you need Meat; there’s a lot less Poultry and Fish to be found, unfortunately), and if you don’t need the ingredients for recipes, sell it all to the Duke to make some extra Lei.Recipes

The Duke can make several meals, and their complexity and the rarity of ingredients determines how much they affect you. If you can, your best bet is to focus on a single meal at a time that seems attainable with the ingredients you can locate in the village. You should be able to knock out at least one or two every time you return to the village; follow this guide and you’ll likely have them all done before heading to the Stronghold and Factory areas.

Herbed Fish3 Fish3 PoultrySlightly increases total healthBird and Beast Pilaf4 Poultry1 MeatDecreases damage taken when guardingThree-Flavored Mititei4 Fish2 Poultry3 MeatIncreases total healthTochituri de Pui4 Poultry3 Meat1 Juicy GameGreatly increases total healthCiorba de Porc1 Fish5 Meat1 Quality MeatGreatly decreases damage taken when guardingSarmale de Peste6 Fish1 Finest FishIncreases movement speedFish LocationsCastle Dimitrescu drawbridge, through the Maiden and Demon gate. Step into the water to the left of the bridge to find a pool full of fish. You can get these as soon as you open the gate the first time, or return later.Moreau’s Reservoir. Once you’ve drained the reservoir area, return to the first windmill where the crank broke. Follow the path past the building to its lowest point to find a spot that still contains water and fishSouthern riverbank. After leaving Moreau’s Reservoir, head toward the Ceremony Site but don’t cross the river. Use the crank to lower the bridge on the bank of the river and cross to find a boat. Take it south to the next dock, then get out and turn left. Follow the path to find a pool with fish (also the Finest Fish ingredient location)Otto’s Mill. You’ll find one fish in the room full of meat.Poultry LocationsIn the village, behind the house with the red chimney. You’ll find your way into this location after you leave Castle Dimitrescu, so the chickens should be easy to get to.In the graveyard, through the Iron Insignia Key door. You’ll need the key from Castle Dimitrescu, which you receive for solving the piano puzzle.Near the Fallow Plot. Turn right just as you enter the field to find a shack south of the area and chickens behind it.East Old Town. You’ll gain access to this area after leaving Beneviento house. Look for a building on the southwest side of the area with chickens behind it.Moreau’s Reservoir. After you come out of the mines and find the Duke and the controls for the dam, look behind the building for chickens.Otto’s Mill. Look for at least one Poultry in the big room full of meat.Meat LocationsWest Old Town. After completing Castle Dimitrescu, look for pigs at the south end of the area near the Workshop, which has the gate that says “Do Not Enter.”Near the Beneviento’s Gardner’s House. Once you’ve left Castle Dimitrescu and been to the house with the red chimney, you can head toward Beneviento house. You’ll find animals on the left side of the path as you’re approaching the house, near the Gardner’s House. (You might have to wait until after you’ve left the Beneviento house to get to these.Windmill near Moreau’s Reservoir. As you approach the windmill building on your way to the reservoir for the first time, you’ll find a goat just outside the building.Village near the graveyard. After you leave Moreau’s Reservoir, a goat will just be wandering through the middle of town.Otto’s Mill. A goat hangs out just in front of the mill, which you can reach after you’ve left Moreau’s Reservoir. You’ll also find a whole bunch of meat inside the mill.Bluebird Location – Juicy Game Ingredient

The first rare animal is the bluebird. You’ll find the photograph marking the bird’s location in the outhouse behind the gardener’s house near Beneviento house. You might recognize it as showing the graveyard that surrounds the Maiden and Demon Gate to Castle Dimitrescu. Look for the bird in the tree in front of the gate; you’ll get the Juicy Game ingredient, which you can use to make Tochitura de Pui. The mean will greatly increase your total health.

The second rare animal can be found and killed after you return from the Beneviento house–but you won’t find the photo identifying it until you make your way toward Moreau’s Reservoir. The photo is on a barrel right outside the windmill that marks the entrance to the reservoir, but you can find the white pig back near Luiza’s house. Head through the Fallow Field to Luiza’s, but instead of going to the burned-out building, turn right to the small house where you rescued Elena and her father the first time you were here. Go through their house and jump through the window to get into the yard behind the house, where the white pig hangs out. That’ll get you the Quality Meat for the Ciorba de Porc recipe, which greatly decreases the damage you take when guarding.

The last rare animal pops up after you’ve left Moreau’s Reservoir. You’ll find the photo identifying the fish Head back to the Altar location in the village, then west toward the Ceremony Site. Instead of crossing the bridge, head down to the riverbank and use the crank tool to lower the second bridge there. When you get to the far side, you’ll find a boat you can use to navigate down the river. Take the boat south until you hit another dock. As you disembark, turn left and walk down the path into a small pool, which you’ll find full of fish–including a yellow one. Killing the fish of a different color rewards you with the Finest Fish meat, which can cook up the Sarmale de Peste meal to permanently increase your movement speed.