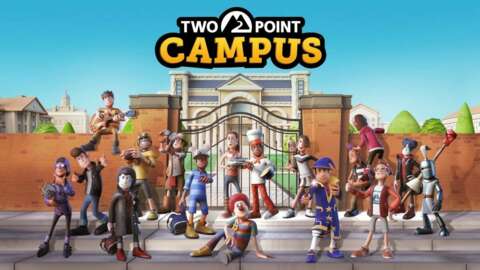 Two Point Studios appears to be hanging up the lab coat and reaching for a cap and gown in its follow-up to 2018’s Two Point Hospital, Two Point Campus. While the game has yet to be officially confirmed, a listing on the Microsoft store (since taken down) unveiled images and a lengthy description of the game, which promises to be full of laughs, “twists,” and “new creative tools to help you build the university of your dreams.”

Similarly to Two Point Hospital, Two Point Campus appears to be a comedic management sim packed with plenty of puns and nonsense. One such example is that players are permitted to teach “Knight School” at their universities, a series of classes where students can learn jousting and other chivalrous skills. The game also features a Gastronomy class, where students create “mouth-watering concoctions like giant pizzas and enormous pies.” When not creating a wacky course catalog, players must build up their campuses with the best professors and facilities to “watch the academic potential of your students get unlocked.”

However, just as importantly as academics is the happiness of player’s students. In addition to managing their money and resources, players must also get to know their pupils and “explore their individual personalities, wants and needs” in order to keep them happy with clubs, societies, and gigs. In fact, it seems like the happiness and relationship status of your students will play a pretty major role in your college’s success based on the game’s description. According to the listing, players will need to “surround [the students] with friends, help them develop relationships, furnish them with pastoral care and ensure they have the right amount of joie de vivre to develop into incredible individuals who will do the legacy of your university proud.”

On top of these shifts, Two Point Campus players will not only enjoy a change of scenery, but have more control over it as they unlock the ability to build outside. According to the game’s description, the title features additions that allow players to “lay down pathways with new easy-to-use tools, plant glorious collections of outdoor flora,” and “place benches, fountains, sculptures, hedgerows–even picket fences.” The listing then jokes “the only limit is your imagination (and your in-game bank balance).”

While the listing for Two Point Campus did not contain a release date, it did confirm the upcoming game will be coming to PC, Xbox One, and Xbox Series X|S. It’s also worth noting Two Point Hospital did eventually come to both the Switch and PlayStation 4 a year and a half after it’s Microsoft exclusive launch, a pattern Two Point Campus could repeat.