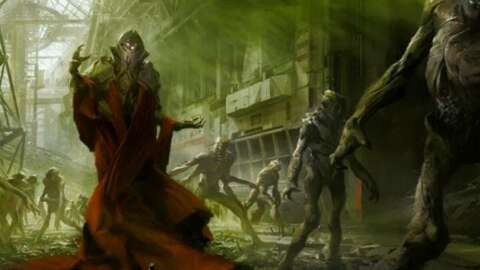 One YouTuber has discovered something interesting in Quarantine Sector 236 of the European Dead Zone. Amidst a collection of statue placeholders in that area, several destructible pieces of the environment can be found, and naturally, destroyed.

It’s not clear what purpose destructible trees will have in Destiny 2, but it would be a first for the series, which is now almost seven years old. The environments of the game have largely been static and resilient enough to easily shrug off several Guardians activating their Supers. The trees in the secret area, however, fall apart from a Titan shoulder-charging through them as JB3 demonstrated in the video below.

As Forbes noted, this could play into the zone that next year’s Witch Queen expansion is rumored to take place in, a version of Chicago that Bungie hinted at when it released a teaser image in its latest weekly blog post. Old Chicago was allegedly meant to be in the original Destiny, but it was cut during development and has since then been briefly mentioned in Destiny 2.

While destructible trees don’t sound too revolutionary, it would be another environmental upgrade for Destiny 2 that began with the Beyond Light expansion experimenting with harsh winter weather conditions on Europa. An entire forest of breakable trees could in theory be used to create a more atmospheric map. Hive soldiers destroying a forest or lost sectors hidden by a clump of trees would make for an interesting change of pace.

In other Destiny news, the latest patch has significantly nerfed Stasis abilities in PvP after that subclass became too powerful in the game’s multiplayer Crucible mode. The Gaming Community Expo charity event for 2021 has also gone live and is offering fans a chance to win a replica of the Midnight Coup hand cannon. A donation of $77 to the fundraiser earns you an entry in the raffle, with proceeds going towards raising money for St. Jude Children’s hospital.

Destiny 2’s latest season has also kicked off, introducing shades of grey to its traditional story of good vs evil, making for a narrative that is engaging and the best that it has ever been.