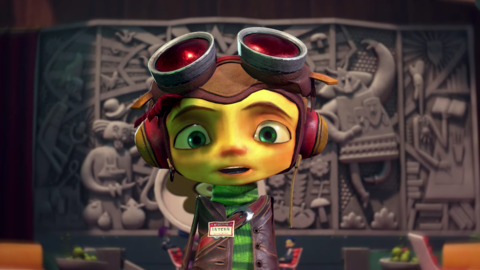 After a more than 15-year wait, Raz and his talented pals will return to action in Psychonauts 2 on August 25, Microsoft announced during its E3 2021 showcase. Psychonauts 2 had suffered multiple delays since its reveal in 2015, but now we’re only about two months away from its release. If you know you want to jump into the zany platforming world crafted by Double Fine, you can preorder Psychonauts 2 now for Xbox One/Xbox Series X and PC (PS4/PS5 preorders should go live soon).

Psychonauts 2 digital preorders are available on the Xbox Store and PC. No preorder bonuses have been announced at this time. We expect physical edition preorders to go live soon at major retailers.

Once again, you play as Raz, a young man with some pretty cool abilities, such as telepathy, telekinesis, astral projection, and more. In Psychonauts 2, Raz goes on an adventure to bring the villain Maligula back to life. The game kicks off after the events of Psychonauts in the Rhombus of Ruin. Raz and friends have rescued head Psychonaut Truman Zanotto. Unfortunately, during this mission the Psychonauts organization has been radically changed, which puts Raz in a difficult position. Raz’s adventure takes him to mind-bending worlds with precarious platforming sequences and larger-than-life boss battles that will put his skills to the test.