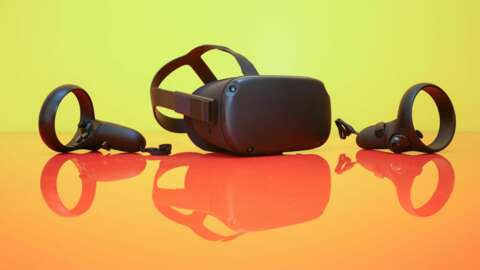 The original Oculus Quest will soon be getting Air Link support, which allows for PC-based VR games to be streamed directly to the headset without a wired connection. On a Facebook post teasing Quest software update v30, CEO and co-founder Mark Zuckerberg commented that Air Link support for the first Oculus Quest headset is coming, although he did not say when.

Air Link recently launched on Oculus Quest 2 in the v29 update, allowing the headset to play PC VR games that aren’t available on the Oculus Quest directly through the headset, like Half-Life Alyx. This feature is a wireless solution for Oculus Link, which did the same thing but via a USB-C cable and provides official support for playing non-Oculus games. Using Air Link does require having a powerful enough PC to run the games and a good enough internet connection to stream to the headset. The feature requires a 5GHz router; Facebook recommends having your PC connected via ethernet in order to minimize latency.

The original Oculus Quest was reportedly discontinued last September, right before the Oculus Quest 2 released in October. The Oculus Quest 2 outsold all of the other Oculus branded headsets as of the end of March and has exclusive Assassin’s Creed and Splinter Cell games coming to the headset in the future. For anyone looking for a “Facebook free” version of the Oculus Quest 2, the business version is available but costs significantly more.