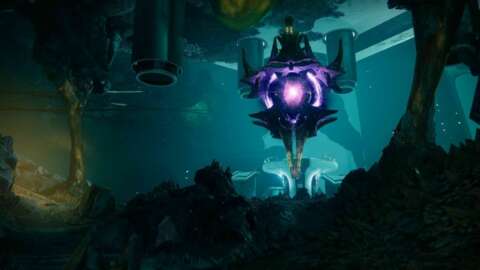 Savathun walks among us. The creepiest villain in Destiny 2–one Bungie has been slowly revealing over the course of the last four years–is seen apparently inhabiting some human form in the Last City in a recent lore entry for the Season of the Splicer. Some kind of shape-shifted Savathun is wandering our streets, puking up black stuff, and trying her damnedest to keep from being exposed while she unfurls her various evil machinations on the game’s world.

The way Destiny 2 has been building Savathun, one of the three incredibly powerful Hive gods and seemingly the big bad of next year’s Witch Queen expansion, has been absolutely masterful. Savathun has been a threat since vanilla Destiny 2, but we’ve only seen the effects of her influence as her many plans spread out across the game world. She’s popped up again and again, but not physically or personally–only as the implied puppet master behind various events. The Dreaming City’s whole three-week time-loop curse? That’s Savathun. She engineered pretty much everything that happened in the Forsaken expansion–so far as we know, anyway–and has been popping up here and there to be the monkey in the wrench time and time again since then.

Now we know she’s actually behind the latest threat in the game, the Endless Night that’s blanketing the Last City. We have no idea what she’s trying to accomplish, but we know the Endless Night is sapping the City’s electrical power, increasing sickness, and gravely harming morale in a way that’s beginning to brew civil unrest. Savathun’s machinations are seriously dangerous and seriously damaging, and we’re struggling to even understand them, much less anticipate and circumvent them.

But Destiny fans who have been paying attention to the lore are already coming to the conclusion that I have, which is that all these spooky Savathun plots are actually a series of red herrings. Unlike big scary enemies such as Oryx and Ghaul, Savathun isn’t working diligently to conquer humanity. She’s not carefully moving pawns around the board to bring about our ultimate destruction. Instead, what I think Witch Queen is going to reveal is that Savathun has been carefully creating this vast, multi-year chain of events with the aim of tricking us. She wants to trick us into becoming her friends.

For that to make sense, you have to understand how the Hive work, and specifically, how Savathun and the other Hive gods work. Before those in the Hive were the Hive, they were a vulnerable, short-lived people whose lives were generally pretty awful. One of the kings of those people, the head of the Osmium Court, was betrayed by one of his advisers to his enemies and assassinated. That left the king’s three daughters, Aurash, Xi Ro, and Sathona, scrambling in an effort to not get picked off in the coup. The pair wound up finding a ship and diving deep into the gas giant called Fundament, where they lived. There, they discovered worm creatures that pledged to give the three daughters immortality and power, in exchange for constantly feeding the worms in a symbiotic relationship. The three agreed and started converting the rest of the Krill people into the Hive.

If you’ve played Destiny or Destiny 2, you’re probably aware of the Hive’s weird thing with these worms. The Hive have a symbiotic relationship with these worms, and sometimes you even see them drop from dead Hive when you kill them. Most of the worms feed on violence and death–it’s why the Hive have spent millennia conquering the universe and why they’re now in our solar system, messing things up. The more you feed your worm, the stronger you become, but the more it needs to be fed. So the Hive are constantly killing and conquering because they literally cannot stop; if they do, their hungry worms will consume them.

For Aurash, Xi Ro, and Sathona, it was even worse. As the Hive’s founders and its most powerful, they became, essentially, living gods. They found ways to secure their immortality (that’s what the whole Ascendant Realm is about) and new ways to feed their worms. Aurash became Oryx, the Taken King; Xi Ro became Xivu Arath, the Hive god of war; and Sathona became Savathun, the Hive god of cunning and deception. The worms of the three original Hive were fed by the daughters pursuing their natures–Oryx had to constantly pursue knowledge, Xivu Arath had to constantly pursue strengthening herself through combat and conquest, and Savathun had to constantly work to deceive others. And like the rest of the Hive, if they stop doing the thing that feeds their worms, the three gods would be consumed by them, too.

So Oryx, Xivu Arath, and Savathun became extremely, ludicrously powerful, and have lived for, as mentioned, millennia under this system–what the Hive calls the Sword Logic. It’s essentially survival of the fittest, extended to everything in the universe. The Hive believe that if something can be killed, it must be killed, because they want to constantly cut away any weakness from the universe. They figure that whatever’s left will be the perfect shape of life. It means killing isn’t just in their nature, it’s in their core ideology. They make the universe better by removing anything that’s not perfect, and anything that’s weaker than the Hive must be imperfect, and therefore must be killed.

Okay, back to Savathun. Her entire deal is deception, unlike most of the other Hive, who feed their worms mostly by killing. For Savathun, being misunderstood by others, tricking them, manipulating them, and generally getting one over on them feeds her worm. But the whole schtick seems to be getting old. The lore suggests that for a long time, Savathun has been trying to find a way out of this whole worm deal she made.

We saw this first-hand in the Season of Arrivals, when Savathun teamed up with Oryx’s son Nokris specifically in hopes of breaking free of the worm pact. Nokris’s whole deal is that he’s a necromancer, raising Hive from the dead, which is a heresy since the Hive believe anything that can die should die. But Savathun doesn’t seem to have much use for those rules anymore. She’s looking for a better way.

So if we take it as a given that Savathun is trying to find a way to get rid of her worm, which will never be satisfied no matter how much deception or murder she does, then we can start to see her actions in a different light. Savathun can’t kill worm gods on her own, but you know who can kill worms? Guardians. We took on Xol, Will of Thousands in the Warmind DLC and, you know, apparently killed it. And we beat Oryx and sent his giant body falling into the atmosphere of Saturn. We have a pretty good track record dealing with these things.

The thing is, though, Savathun can’t just come to the Vanguard and say, “Hey, I’d love it if you’d kill this worm thing that makes me do evil.” First, would anyone believe her? Second, Savathun’s whole existence is built on trickery and misunderstanding. If she stops doing cons, she literally dies. So what does she do instead?

She institutes a series of extremely involved schemes to get us geared up to kill a worm god, of course.

That’s where we’re at currently. Everything in Destiny 2 is telling us that whatever we think we know about Savathun is wrong; she’s constantly scheming and always working to deceive. If we follow that logic, then the most fundamental assumption we have about Savathun–that she’s our enemy–is the most suspect piece of information possible.

Look at some of the things Savathun has been responsible for lately. In the Season of Arrivals, she worked to interfere with us communicating with the Darkness, which doesn’t make a whole lot of sense if she and the Darkness (which the worms serve and which gave rise to the Hive’s Sword Logic) are allies. In the Season of the Chosen, we learned she helped engineer Xivu Arath’s attack on Torobatl, the Cabal homeworld, which drove Caiatl and the rest of her people to our solar system–and we spent that season opening up a diplomatic discourse with some folks who were previously our enemies. It’s a thorny discourse and not in particularly great shape, granted–but it is a discourse.

And now, in the Season of the Splicer, Savathun has created a situation in which we have to join with the Eliksni, our age-old adversaries, in order to defeat a worse threat in the Endless Night. We’ve seen a whole bunch of problems arise from the Eliksni’s presence in the Last City, but it’s also breaking down barriers between our two species and exposing plots by bad actors. The Endless Night is very likely to leave us stronger, with more allies and newer perspectives, by the time it’s done.

If Savathun is allied with the Darkness, why suppress its ability to corrupt us to its side? If she wants to conquer and destroy us, why create situations in which former enemies are offering alliances against bigger threats? If she’s the ultimate schemer and deceiver, why do we keep seemingly stopping her plans before they can get off the ground?

It’s because the greatest trick Savathun can pull in Destiny 2 is convincing us we’re enemies–until we do what she wants us to do. Savathun can’t just ask us for help, because if she doesn’t deceive, she’ll die. She can’t just offer us an allegiance, because if she stops conning people, she’ll die. She must deceive us (and everyone else) into helping her.

If we free Savathun from the worm gods and the Darkness, she’s suddenly free of the Sword Logic, free of the need to deceive, free of an existence of constant conquest. And maybe she’ll even enjoy having emotions that aren’t centered on killing people, since we keep seeing lore entries where she misses her old pre-Hive family or finds herself feeling things for the humans around her while she deceives them.

The themes of this entire year of Destiny 2 content have been about understanding our former adversaries, discovering common ground with them, and maybe finding a path toward becoming allies–or at least living in peace. That’s going to culminate with Savathun’s machinations in Witch Queen. The thematic threads have an endpoint.

Savathun wants to be best buds with us. She just has to trick us to make that happen.