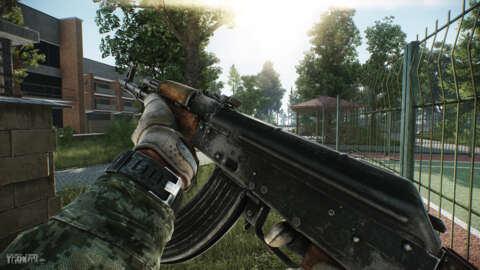 Patch 0.12.11 for Escape From Tarkov has launched after days of hints and teasers from developer Battlestate Games. The patch includes a full wipe of player inventories, setting everyone playing the hardcore MMO first-person shooter back to square one. However, a full list of patch notes for update 0.12.11 has not been released yet.

It’s no secret that a wipe for Escape From Tarkov was coming up. The game has long been due for one, with its last wipe arriving last December. Escape From Tarkov issues player inventory wipes twice a year. Battlestate Games also implemented some in-game changes to prepare players for an inventory wipe, including the deactivation of secure containers, which players use to keep precious equipment and cargo between runs, and hefty discounts at the game’s vendors.

While players may have lost their gear, Battlestate Games has more than made up for it with new content. The Factory expansion was added to the game with patch 0.12.11, adding a new Scav boss as well as new gameplay mechanics, including weapon malfunctions and deterioration. Your trusty Kalashnikov can now misfire, and all weapons slowly deteriorate based on what weapon mods and ammunition you use.

The patch has also introduced Fence reputation, which affects a number of different mechanics including player-scav cooldown, car extract fee, and how much you get for selling items to a fence. With a high fence reputation, players will be more likely to recruit the aid of AI-scavs. Players that max out a fence’s loyalty level will also be able to buy uninsured items lost by other players.

Streamers that play Escape From Tarkov are getting some special treatment with this patch. By sending a request to Battlestate Games, streamers can have their user information hidden from the game client, likely to avoid stream snipers. Requests can’t be sent now, but details on how to send them in are coming at a later date.

You can find the remainder of Escape From Tarkov’s 0.12.11 patch notes down below.